Jewish Family Service of Metrowest (JFS) is excited and proud to share that they have received a generous donation from Ms. Elizabeth “Betty” Smith (née Kaldeck) on behalf of the Kaldeck family!

JFS CEO Lino Covarrubias and Director of Development Jayne Lampert recently reached out to me (Anniey Michelson), sharing this great news. They mentioned that Betty was the daughter of Holocaust survivor Dr. Robert Kaldeck (nee Kohn) and asked if I would be interested in speaking with her given my own family history. My grandfather, Max Michelson, was a Holocaust survivor and co-founded JFS with my grandmother and other community members in 1979. About a week ago, I had the pleasure of speaking with Betty. She explained that she chose JFS as the recipient because of local family connections to JFS and was proud to donate to a Jewish charity that focuses on a variety of diverse areas within the Metrowest community. Betty and I also shared backgrounds on our family’s experiences and discovered a connection in the timeline of her aunt, Alice (Lizzy), and my grandfather. As the granddaughter of a Holocaust survivor, my own existence is a reminder that we must not, cannot and will not forget the atrocities committed by nazi Germany. We must remember those whose voices were muted and lives stolen, and we do so by speaking their names and telling their stories. 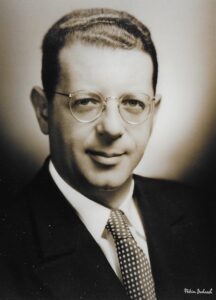 In March of 1938, as nazi Germany expanded its tyrannical rule with its annexation of Austria, Robert sought asylum in Mexico with a group of six other Austrians. After receiving a letter issued in June 1938 from Mexican authorities granting asylum, Robert and the others assembled additional necessary documents for travel. They left Austria in September, 1938, heading for their first stop, Lisbon, Portugal. Robert’s passport was issued here on September 9, 1938 at the German Embassy. By December 1938, the American Consul in Lisbon issued transit visas to each member of the group. The transit visas permitted them to travel through the United States by bus to Laredo, Texas and on to Mexico. Upon arrival at Ellis Island, the seven Austrian refugees were detained with no reason given. Robert wrote a letter of protest on January 31, 1939 after being “held prisoner” for 9 days; three days later, he and his friends were granted passage to Mexico by boat on the SS Orizaba. Once more, upon arrival, they were denied entry, and their asylum was revoked. By chance, Cuban leader, Fulgencio Batista was on the SS Orizaba returning to Cuba after a goodwill visit to Mexico. Seeing their moment of opportunity, Robert and his friend Benjamin Frostig, both fluent in Spanish, spoke with the Cuban leader, petitioning for their own and friends’ safety. Batista obliged. Robert spent eight months living in Cuba while acquiring the necessary paperwork and documents to travel to the US. One of those documents, an affidavit of support, was obtained with the help of the Boston branch of HIAS (Hebrew Immigrant Aid Society). In September 1939, one year after leaving Austria, he arrived in the States by way of Key West, Florida. Now it was time to focus more intensely on his family.

Robert’s sister, Edith, a talented opera singer with the People’s Opera of Vienna, sought refuge in England as a nanny and was fortunate enough to escape the growing regime in Austria. Robert and Edith worked tirelessly to provide affidavits of support for Moriz, Ella and Alice to join them, but sadly, their efforts were not successful. This was due to the increasingly restrictive immigration policies at that time. In early 1942, Moriz, Ella and Alice Kohn were deported to Riga, Latvia shortly after the Rumbula massacre of late 1941. They were placed in the Riga Ghetto, during which time Moriz and Ella were killed. In 1943, the nazis began liquidation of the Riga Ghetto. My grandfather was transferred immediately to the Kaiserwald concentration camp satellite near Riga and shortly after to Stutthof, where the remaining occupants of the Riga Ghetto were sent to be killed in late 1943, Alice along with them. 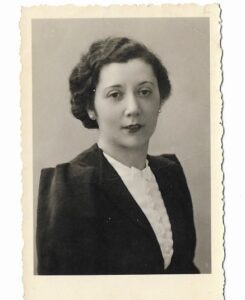 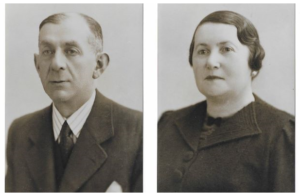 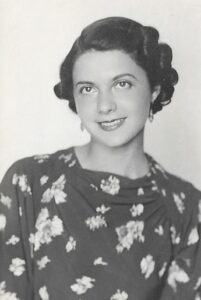 My grandfather, Max, remained a prisoner at Stutthof concentration camp through the end of 1944 before being transferred to Magdeburg, a subcamp of Buchenwald where he was eventually liberated in the late spring of 1945. Following liberation, Max travelled to the United States, settling in Boston where he and his wife, my grandmother Julie, co-founded Jewish Family Service of Metrowest in 1979. He spent the remainder of his life giving a voice to those left behind and advocating community service alongside the agency.

What I found incredibly interesting about my conversation with Betty was that despite the differences in our family history and experiences, we still came away from our childhoods with the same values—what I consider to be our Jewish values. We learned the importance and necessity of humility and service; we were reminded that we should stand up for others. We were told that while it can be hard to do the right thing, we must do it. These deeply rooted values that overcame persecution, injustice and suffering are one of the many things that bring together our community—the Jewish community. It is our commitment to these values that makes our traditions and culture, our families—both alive and lost loved ones, and community strong. We will act. We will stand up for those powerless and those without a voice. It is with enormous gratitude that we thank Betty Smith and her family, the Kaldecks and Kohns, for their generous contributions to JFS as we strive for social, academic and health equity for all. As past JFS CEO Marc Jacobs once said, “May [our loved ones’] memories be for a blessing and [their] legacy be a kinder world, someday.”

Authored by Anniey Michelson with elements included that are in the voice of Ms. Smith, at her request.

Jewish Family Service of Metrowest (JFS) is a nonprofit, community-based organization dedicated to standing up for those left behind and provides services to over 5,000 people in need within the Metrowest and Greater Boston regions each year, including extended day academic support for low income children, nutrition and basic family assistance for struggling families, citizenship and immigrant programs and geriatric care management and other support services that enable frail older adults to live independently. The mission of JFS is to provide vital social, health and community services to alleviate suffering, enhance lives, and support people in need.