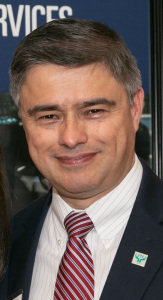 “After a very strong and thoughtful succession planning process, the JFS Board of Directors voted in June to name Lino as Marc’s successor,” said Board President David Milowe. “With Lino taking the helm of JFS, JFS will go from strength to strength, will continue to enhance impact, never make excuses, and always move forward.”

“I have always been impressed with JFS’ leadership both within its professional staff and its volunteer-based Board of Directors,” Covarrubias said. “When I was looking for the right place to focus my efforts after retiring from the Navy, JFS checked all the boxes. The organization’s services and programming within the MetroWest Community, the focus on the most vulnerable within our community in general, and the growing emphasis on supporting immigrants were all positive draws for me.”

As Covarrubias assumes the CEO role, Marc Jacobs, who has held the position since 1996, will move to a CEO-Emeritus, Leadership Advisor role, where plans call for him to serve through the middle of 2020.

In preparing for this transition, Covarrubias and Jacobs have worked together closely examining and analyzing the JFS organizational structure and have begun making organizational design improvements in an effort to continue and expand the role JFS plays in improving social, academic and health equity for all people within the MetroWest community. JFS has served over 5,000 people in the past year by utilizing its professional staff and hundreds of civic-minded volunteers.

In addition to announcing this change, JFS also announced a newly formed Executive Management Team to be comprised of Chief of Learning, Performance and Strategy Rosemarie Coelho, Senior Director of Operations and Revenue Programs Amanda Coughlin, and Senior Director of Programs and Partnerships Lucia Panichella. In addition, Josef Volman will succeed David Milowe as Board President in spring 2020.

“With the leadership team we have in place, we intend to continue our focus on reducing poverty in the Jewish and general community, harness the power of an amazing and expanding group of volunteers, enable elders to remain safe and independent within the community, and provide safety, hope and opportunity for immigrants and refugees,” Covarrubias said. “Much of the progress JFS has made within these initiatives has been the result of great leadership by Marc Jacobs. We will accelerate the momentum Marc created and continue to provide positive impact for everyone in the MetroWest area.”

“Lino has already had a tremendous impact on JFS and the community at large during his time as COO,” said Jacobs. “I’m excited not only that the board saw fit to choose him as our new CEO, but also to see the new and exciting things that I know will result from his leadership.”

Charity Navigator, the largest and most-utilized evaluator of charities in the United States, recently gave JFS a perfect four-star rating with a 100 score, making it one of only 90 organizations out of almost 10,000 across the nation to receive a perfect score. The score is created by evaluating both a charitable organization’s financial health and its accountability and transparency.

About JFS of Metrowest
JFS is a community-based 501(c)(3) nonprofit organization that works with over 5,000 people within the Metrowest and Greater Boston regions each year, supporting vulnerable children and families, individuals, immigrants, and elders aging in place.

JFS provides the tools to meet life’s obstacles to stabilize during a crisis and optimally achieve self-sufficiency, strengthen lives, improve wellbeing, and build a stronger community. To learn more about JFS, visit https://www.jfsmw.org/ or click to view the 2018 Report to the Community.